It took a few episodes to hit its stride, but once The Righteous Gemstones found its footing, the series evolved into a real… gem. As the show began to incorporate larger arcs, drama, and larger-than-life characters (particularly Walton Goggins’ Uncle Baby Billy) the show revealed itself not just a dark comedy about televangelism, but as a wry satire of the prestige dramas that populate countless streaming services. In the process, it became just as engrossing and as addictive as the soapy television that it set out to parody.

Series creator Danny McBride explained to Polygon in August 2019 that he envisioned Gemstones as an “epic sprawling tale like the fucking Thorn Birds,” referring to the quintessential saga that become the second-highest-rated miniseries of all time in 1983. The HBO dark comedy also takes cues from Soap, Mary Hartman, Mary Hartman, and FX’s Nip/Tuck and expertly balances the drama with the outlandish, pitch-black comedy and dialogue that McBride and partner David Gordon Green have become known for.

The crux of Gemstones is that threats come not only from outside the family but within. Season two is gearing up to showcase John Goodman’s Eli, opening up with a flashback to Memphis 1968 where the Gemstone patriarch is wrestling on a low-rent circuit under the name The Maniac Kid, described by the announcer as “all muscle, all attitude.” Upon payment from the promoter, Eli is recruited to pick up some bonus pay to help the promoter and his son Junior to muscle some money out of a welcher. As the trio cruise through the streets of Memphis and King Curtis’ “Memphis Soul Stew” plays, the stylish direction from David Gordon Green elevates Gemstones above your average comedy series. 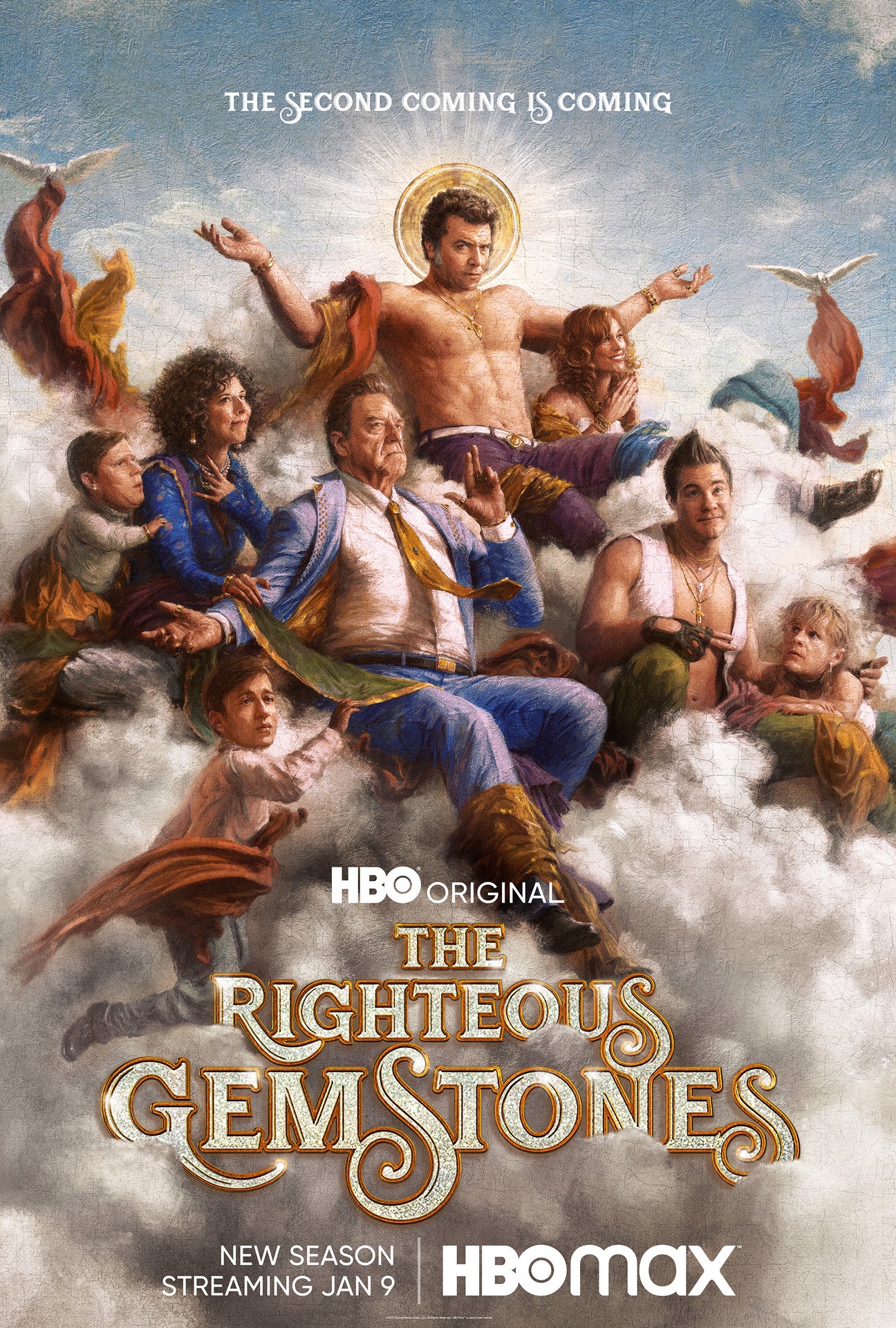 "I Speak In The Tongues Of Men And Angels"/"After I Leave, Savage Wolves Will Come"

"I Speak In The Tongues Of Men And Angels"/"After I Leave, Savage Wolves Will Come"

While McBride’s whiplash blending of comedy, drama, and horror does not jibe in his and Green’s reboot of the Halloween franchise, when you’re dealing with subject matter as way-out as religion, out-of-touch rich people, and the family dynamic, it all feels right on. As Junior hollers “Get a job” at a group of Black protesters decrying Jim Crow, his father slaps him upside the head, asking “Did I raise you to be a piece of shit? They just want what everyone else wants: a piece of the fucking pie.” It’s a telling line as what we know about Eli Gemstone later in life, he got a piece himself—a big piece.

Junior and Eli break into the house, and we see Eli as we’ve never seen him before—a far cry from John Goodman’s peaceful but stern portrayal— breaking both of the deadbeat’s thumbs before returning home for family dinner and providing a half-assed blessing at a family dinner. This displeases his father, who slaps Eli in a moment not unlike what happened with Junior and his father earlier.

As the show catches up to the present day, we’re introduced to other members of the newly launched Gemstone streaming platform, G.O.D.D. (Gemstones On Digital Demand) notably, Makewon Butterfield who, in his words, is being painted as a “deviant sex doer” by the media, thanks to a leaked sex tape reported on by Thaniel Block (Jason Schwartzman). When he’s let go from the G.O.D.D, he attempts to kill himself by jumping from a second-story window. This results in a pair of very silly-looking broken legs, but not before Butterfield warns Gemstone and the brother and sister pastors to beware of Block as he is a “crusader” who is “all our problems,” as they all have their own secrets. This sequence feels very emblematic of the best parts of Gemstones: The drama is real, the dialogue is intentionally silly in McBride’S overtalking, over-explaining style, and the violence outlandish.

The end of the first season found the dysfunctional Gemstone clan reckoning with the fallout from the attempted blackmail of firstborn Jesse (Danny McBride) by his prodigal son Gideon (Skyler Gisondo). Gideon is back home and Jesse and Amber (Cassidy Freeman) are setting him up on the Gemstone compound in late Grandaddy Roy’s (M. Emmet Walsh) mansion. The couple appears to be on better terms than they were at the end of last season, when Amber shot Jesse in the ass, and are now sniffing around the successful Lissons, a gorgeous preaching couple from Texas portrayed by Eric Andre and Jessica Lowe.

The Lissons are sort of a mirror image of Jesse and Amber. As Tyler, Eric Andre goes full dork who thinks he’s cool, sporting a side part and wailing out a guitar solo during one of their sermons—and, like Jesse, having a very attractive, very stylish wife by his side in Lindy (Lowe). (Apparently, this is a tenet of televangelism.) Their church is decorated in gaudy, western-influenced golds and browns in contrast to the purples and whites of the Gemstone center. The Lissons are looking to get the Gemstones involved in Zion’s Landing, a Christian timeshare resort which Jesse sees as a sure thing, but needs to round up the cash from Eli, who Jesse thinks should be considering retirement.

“I’m not going anywhere,” exclaims Eli at church dinner, suggesting a battle for control of the Gemstone empire is in the cards for the father and the son. One of the highlights of “I Speak In The Tongues Of Men And Angels,” the first episode of season two, is a typical Danny McBride rant, in which Jesse attempts to enlist brother Kelvin and sister Judy into his mission to usurp Eli, which climaxes in him referring to them as lesser siblings Stephen Baldwin and Frank Stallone respectively.

When Eli is first visited by a now-grown Junior (Eric Roberts), he is rightfully suspicious, assuming that Junior is interested in blackmailing him. It is an inspired bit of casting, bringing in Roberts, a great character actor who audiences have an immediate Pavlovian distrust of thanks to decades of portraying despicable, unsavory characters (much like casting Ray Wise in season five of 24). But it does feel like Junior simply wants to reconnect with an old friend—whom he sees as a brother—and the two go out for dinner but run afoul of a big ol’ construction worker, pawing at his scantily-clad lady friend on the bartop of the restaurant. When Eli suggests he stop, Junior insults him, telling him to “go back to the movie Cocoon,” which leads to a fight in the parking lot finding Eli unloading on his foe, using his old finishing move and breaking the meathead’s thumbs, looking like a man possessed.

Episode two, “After I Leave Save Wolves Will Come,” opens with Schwartzman’s Brooklyn jagoff Thanial Block setting his sights on Eli Gemstone, revealing headlines reporting on a past indictment. Block is the picture of New York journalist smugness, from his costuming to his beard. One of the most admirable parts of Gemstones is that the show rarely punches down on churchgoers, instead going after unscrupulous preachers and taking the piss out of coastal types. The episode really gets going when newlyweds Judy (Edi Patterson) and B.J. (Tim Baltz Contents) drop by Eli’s place to ask him to baptize B.J., where they meet Junior, who’s clad in not much more than a robe and his boxer shorts.

When Junior suggests that B.J. may be one of his girlfriends, B.J. offers a handshake which Judy slaps away exclaiming “he’s big dicking you,” an early contender for the funniest interaction of the season. This is topped only when Judy presumes that Eli and Junior are fucking and she just rattles off “hanging out here, being rough with each other like grizzly bears doing donkey punches, tussling each other, getting each other hard,” delivering the dialogue that has been a staple of this HBO series. Junior seems like he’s looking to find Jesus, but there is still something untrustworthy about him. In a stand-out moment, he compares starting a church to pro-wrestling which all tracks, Roberts chewing the scenery like dinner rolls every chance he gets. It’s a memorable performance and I look forward to what’s to come.

Meanwhile, after last season’s marital strife, Jesse and Amber have kickstarted a second chance prayer group to offer counseling to their friends and the Gemstones faithful, and in typical fashion, try and raise some capital for their timeshare with the Lissons. The couple put on their finest Western wear—Jesse channeling Marlon Brando in The Fugitive Kind or Nicolas Cage in Wild At Heart in a snakeskin blazer—and join Lyle and Lindy for a line dance led by Joe Jonas in a leopard print poncho. There is a magic hour shot as Amber and Jesse commiserate in a stable about how they deserve to part of the elite and conspire to get the investment money from Eli (utilizing a green dress that “pushes them titties up”) that makes you wonder why can’t more Hollywood comedies attempt to look beautiful, cinematic, and actually be funny.

At church dinner, Eli reveals that the reporter that brought down the Butterfields is now in the Gemstone’s backyard. Junior suggests that he and Eli take care of it like in the old days which perplexes Jesse, suggesting that he doesn’t know everything he thinks he knows about his father’s past.

When the Gemstone children decided to pay Thaniel Block a visit, a tense scene unfolds (including one particular shot that feels straight out of a horror film) revealing that somebody has already been to the house, leaving Thaniel Block and at least two others for dead. Jesse, Judy, and Kelvin return to the compound and are discovered trying to clean up in the fountain by Eli, who claims to have been out on “church business,” but is also covered in blood—a pretty great cliffhanger that elevates a very funny episode with some wild twists and turns.

Dying Light 2 re-raises the "Are video games too long?" question

R.I.P. Ronnie Spector, of The Ronettes

The Epic Games Store Is Finally Getting Proper Achievements

Paramore's first new album in five years is on its way