It’s hard to date. It’s harder to date as a single parent. It’s even harder to date when you have a terrible secret likely to send any potential suitor running for the hills. Wolf Like Me, a new six-part dramedy series from Peacock, appreciates just how difficult finding human connection can be.

Josh Gad reteams with Little Monsters director Abe Forsythe for a show with tonal similarities to that largely delightful film, which saw Alexander England and Lupita Nyong’o fall for each other while protecting a kindergarten class from a zombie hoard. That balance between horror, sincerity and pitch-black laughs works well for the duration for Little Monsters’ slim 94 minute runtime.

Now faced with filling six 30-minute episodes, Forsythe pads out proceedings with a little more sincerity, delving into the stifling loneliness felt by advice columnist Mary (Isla Fisher), emotionally closed-off widower Gary (Josh Gad), and his precocious daughter Emma, who is still traumatized by her mother’s death from cancer and feels unable to confide in her father or therapist.

We first meet Gary in the midst of an extremely brutal breakup with a woman he was unable to open up to in the three months they were dating, which sets the tone with some extremely funny meteor-based retorts peppered in among emotionally devastating insults. Also true to the show’s darker rom-com form—rather than your typical meet-cute, Gary and Mary meet in the aftermath of a horrific car accident that leaves young Emma in a neck brace. 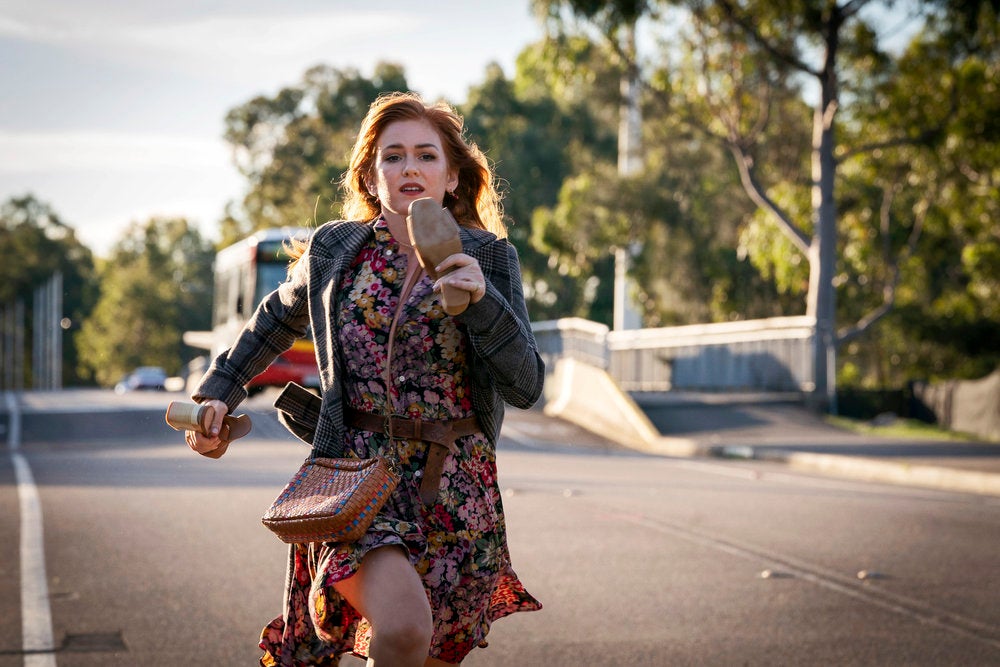 Like Forsyth’s previous work, Wolf Like Me is set in an Australia curiously populated with Americans (including, puzzlingly, Isla Fisher pretending to be an American rather than using her native accent). The city of Adelaide it depicts is also ludicrously picturesque, filled with postcard-perfect landscapes, trendy vegan-friendly cafes, and online columnists clad in silk PJs sashaying around homes that could appear in Architectural Digest.

Gad and Fisher, best known for their broad comedy chops, are cast against type. They play their roles straight for the most part; aside from the occasional hot coffee collision or ridiculous run through a marathon, they use their physical comedy skills sparingly. The laughs, when they do come, tend to be in the blackest moments—not so much landing punchlines, but phenomenally dark statements delivered with such wide-eyed sincerity that they elicit shocked giggles.

What works even better is the chemistry between the two leads: Gad and Fisher are entirely convincing as broken people, willing to look past even the largest of red flags to carve out a little happiness together. Their portrayal of trauma feels lived-in and weary, the spark between them feeling authentically rare and thrilling to them both. Just as sweet is the bond Mary forms with Emma, which proves a lovely testimony of the potential of an adult providing a safe space for a child who feels misunderstood by their parents and teachers.

Where the show falters is in taking advantage of the nature of its format. The story doesn’t fit cleanly into half-hour chunks, and Forsyth doesn’t neatly wrap everything up with a bow in the finale so it feels more like a single story in arbitrary 30-minute slices rather than something naturally created for the medium of television, where utilizing an episodic structure can be an art form in itself.

The weighting of the story is also off, with the first half of the season feeling padded out in order to hold back plot points and secrets that are painfully predictable. The more seamless momentum of a film would have meant the predictable nature would matter less, and the false starts to their inevitable romance would land less heavily.

But while the first two episodes require a healthy dose of patience, it’s worth holding on for the remaining four, where the show stops relying on mystery and the two main characters lay it all on the line, for the audience and each other.

Fisher and Gad flourish as actors when their characters are at their most vulnerable, creating a dynamic that’s impossible not to invest in. Then, when obstacles come their way, the stakes (which can only be alluded to here) become distinctly human even at their most extreme. The normal beats of romance are observed but taken to outrageous heights thanks to embargoed plot details that may already be obvious from the title.

There’s plenty of foreseeable reveals held back until the last moments and the largest, despite being sign-posted a mile off, is extremely satisfying and well-realized. The final episode pays tribute to many of the great horror sequences that came before it, made all the better by a wholly earned emotional conclusion and the sweetness with which a moment of terror becomes life-affirmingly romantic.

Wolf Like Me is fundamentally about triumphing over a primal fear so many of us have, that letting the people we date see who we truly are will inevitably lead to disaster. It then takes great joy in the moments where that doesn’t come to pass.

While the show wouldn’t introduce something so messy, so tied up in grief and horror tropes only to betray it with an overabundance of schmaltz, the eventual conclusion for both Gary and Mary feels true to its overall spirit. When you meet someone that brings out the best in you, it’s worth leaning into that feeling and seeing where it takes you—something that Wolf Like Me could have done with realizing a little sooner.

Kendrick Lamar teams up with South Park creators for film

Asa Butterfield, Natalia Dyer to lead All Fun And Games

Here's a new trailer for The Batman

The Book Of Boba Fett recap: S1, Ep 1, "Stranger In A Strange Land"